Mungo or Kentigern was born in 518. He was the son of Tannoch, a princess of Lothian, who has given her name to St Enoch’s Square in 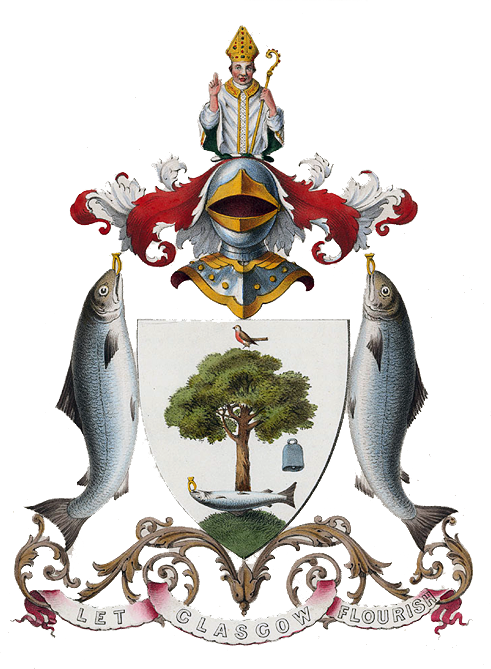 Glasgow, and to Tannochside near Uddingston. Tannoch’s father was a pagan and when she adopted Christianity she was expelled from her home. During her wanderings she was raped, and her father ordered that she be set adrift in an open boat at Aberlady in order that her pregnancy should not bring a slur on the family name. The boat was washed upon the shore at the Christian settlement of Culross and there the infant Kentigern was born. He was christened Kendyern, British for “Great Chief’. (The British form indicates that the ‘g’ should be soft. The hard ‘g’ perhaps arises from the fact that Jocelyn wrote in Latin).

But within the community he was often referred to by the pet name of Myncho, which has become Mungo, and means “little dear”. It is by this name that he is known as the patron saint of Glasgow. Having been ordained priest, Kentigern set out to restore the faith at Glasgow. He crossed the Forth at Alloa and set up his church on the Molendinar Burn, where Glasgow Cathedral now stands at the top of the High Street. He was greatly aided in his work of conversion by the local chieftain Rederich, whose fortress was Dumbarton, the fort of the Britons. Rederich brought over a Bishop from Ireland to consecrate the 25-year-old Kentigern first bishop of Glasgow.

Trouble from the pagans led to the flight of Rederich and Kentigern to the South. They stopped for a short time near Penrith and established a settlement at Crossfield. After a brief sojourn there, Kentigern travelled to Wales where he founded a monastery in the Vale of Ciwyd. Meanwhile Rederich and allies had defeated the pagans near Carlisle and Kentigern was able to return to Scotland in 573. He stopped at Hoddam, by Dumfries, and established missions throughout Galloway, which had been converted 150 years earlier by St Ninian.

After eight years Kentigern returned to Glasgow, where he died in January 603. In 1197, probably as a result of Jocelyn’s writings, a church was built over the tomb, and his church was the beginnings of the present Glasgow Cathedral. In Glasgow he was known better by his pet name of Mungo, but dedications to St Kentigern are common throughout the South of Scotland, in the North of England, and in Wales. Jocelyn’s account informs us that Kentigern met many other saints -St Serf at Culross, Saints David and Asaph in Wales, St Columba in Glasgow.

He also paid several visits to Rome, on the last of which the Pope gave Glasgow the title “Special Daughter of the Church”. St Kentigern was chosen as our patron firstly because of his connection with the old Kingdom of Lothian, his grandfather being Loth who ruled from the fort on Traprain Law near Haddington; and secondly because so many of the pupils here have Glasgow origins.

The meaning of Glasgow’s coat of arms (pictured above)

The Glasgow coat of arms relate to the life and legend of St Mungo. The arms include ‘the tree that never grew’ relating to St Mungo tending a fire in St Serf’s monastery but he fell asleep and some lads who were envious of Mungo’s favoured position with St Serf put out the fire while he slept. When Mungo woke he broke off branches from a frozen hazel tree and by praying over them and lit the fire again, the hazel branches were transformed in to a fully grown tree. The ‘bird that never flew’ is about a robin that had been tamed by St Serf and it had been accidently killed. Mungo prayed over the robin and brought it back to life. The ‘fish that never swam’ is about a ring which a King gave to his wife Langoureth who gave it to her lover a knight who wore it and when the King noticed this took it from him when he was sleeping and threw it in the River Clyde. The King then demanded to see the ring from Langeoreth and she confessed this to Mungo who sent a monk to fish the river and found the lost ring. The bell is attributed to a bell that was reputedly given to Mungo by the Pope.  The motto “Let Glasgow Flourish” is an abbreviation of a statement taken from a sermon given by the saint: “Let Glasgow flourish by the preaching of Thy Word and the praising of Thy Name.”

Mungo’s mother Thenew is  also known as St Enoch. It is believed St Enoch’s Square in Glasgow City Centre is the site of her burial ground.

There is Mass in the SSPX church of St Andrew, Renfrew Street, Glasgow, at 6.30pm on Monday, 14 January, to mark the Feast.

The Truth About Australia’s Corrupt Police

From the YouTube Platform... (1) As an Australian living through this in... read more

https://www.youtube.com/watch?v=2SQ1iW7APHk And don't miss the video record of the visit of the... read more

Satanic Black Masses & The Scandal of Communion in the Hand…

27 November: The Story of St Catherine Laboure & The Miraculous Medal…

Mother and Child The sound of the evening Angelus bells floated across... read more

Editor writes... More and more, I hear about people of all ages... read more

From Online Commentary... This court just saved an average of 500,000 babies... read more

Priest on Scandal of Denying The One True Religion: Outstanding Interview

https://www.youtube.com/watch?time_continue=3&v=S-zHfqCaS28&feature=emb_logo Comment:  Fr David Sherry is an Irish priest of the Society of... read more

From The Scotsman Newspaper... Last weekend, the Scotsman gave due prominence to... read more

The light that shone in the Church during eleven years of... read more

16 July: Feast of Our Lady of Mt Carmel

The Feast of Our Lady of Mt Carmel is a very... read more

Happy Feast of the Sacred Heart of Jesus!