From the Daily Record…

As MSPs voted by 86 votes to 39 in favour shouts of “shame on you” could be heard from the public gallery.

But there was also applause from supporters of the reforms – which will remove the need for a medical diagnosis of gender dysphoria before obtaining of a gender recognition certificate (GRC).

The changes will also drop the minimum age for applying for such a certificate from 18 to 16, and bring down the time a person is required to live in their acquired gender.

Opponents of the Bill have said it could endanger women and girls and put single-sex spaces at risk, something the Scottish Government has repeatedly denied.

The First Minister had earlier defended the reforms and claimed the bill may be the “most scrutinised piece of legislation” in Holyrood’s history.

And she insisted the removing of the need for medical diagnosis for those who want to legally change their gender was one of the Bill’s key elements.

“I will never apologise for trying to spread equality, not reduce it, in our country,” she said. 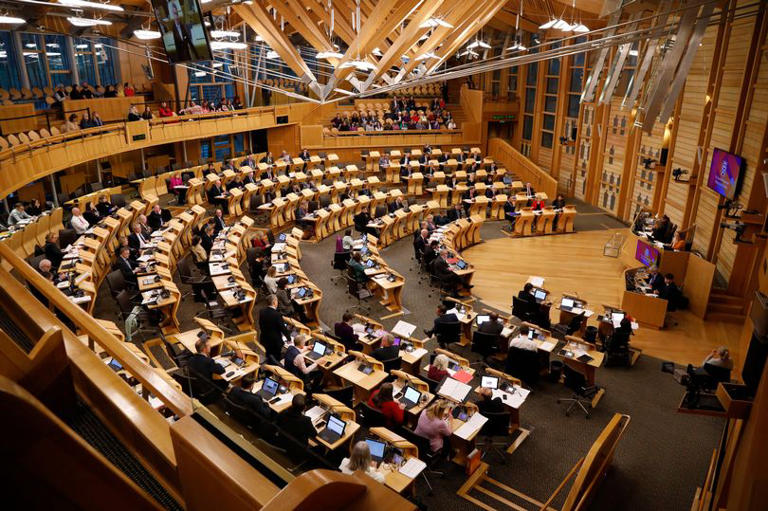 Shona Robison, the social justice secretary, said it was an “historic day” after MSPs voted in favour of the legislation.

“It simplifies and improves the process for a trans person to obtain a gender recognition certificate – which many currently find intrusive, medicalised and bureaucratic,” she said.

“The legislation makes no change to the reserved Equality Act 2010 and that principle is enshrined in the Bill. As I have made clear, the Scottish Government continues to support the provision of single-sex services and the rights of women.

“The passing of this bill is a significant step forward in creating a more equal Scotland, where trans people feel valued, included and empowered.”

The debates this week have been marred by protests from the public gallery which saw some individuals shout “shame on you” at MSPs.

It came after another amendment that would make it harder for sex offenders to apply for a GRC was voted down. While outside the parliament building women against the Bill held a protest both days MSPs were debating.

Ahead of the debate the Scottish Tories attempted to delay proceedings by tabling four amendments to the agenda from four members, forcing a vote on the timetable for the consideration of amendments, raising a further motion which MSPs had to vote on and a number of points of order – all before the debate on the amendments had started.

The party also opted to push amendments to a vote, even when the proposer of the changes did not.

MSPs backed a change tabled by SNP MSP Gillian Martin to the law which means anyone subject to a sexual harm prevention order or sexual offences prevention order will not be allowed to seek a GRC.   Source…

It’s difficult to imagine that the SNP could sink much lower than this immoral legislation.  But, where is the outcry from Catholics – bishops, priests, laity? And, whatever happened to “follow the science”? Your thoughts…

From Rorate Caeli... Behold the Church of bridges and mercy, open and... read more

Vatican II: Revolution in the Church

Converting to Catholicism: No Easy Task for a Protestant Pastor – Here’s Why…

Comment:  Keith Nester, the above speaker, made me wonder just how many... read more

Christopher Ferrara, Fatima Center, writes... It should have been no surprise to... read more

30/11: Feast of St Andrew – Pray To Our Patron Saint For Scotland… Urgently!

Maria Agnes Quinn, the young singer in the above video, writes:  I... read more

The Meaning of the Virgin Birth of Our Lord

Editor writes... As we approach Christmas, there will be a treat (NOT)... read more

Are Face-Masks Linked To Lung Cancer?

The following information is highlighted as received in my inbox... THAT MASK... read more

Coronavirus Lockdown: Is it Sinister – are we losing our civil liberties forever?

https://www.youtube.com/watch?v=mx8xKcQMTRs&feature=emb_logo Comment:  Is the presenter of this video a "conspiracy theorist"?  A "conspiracy... read more

Comment:  One of the commentators on Sky News Australia recently queried whether... read more

We’ve had Clown, Beach, Balloon and Zoo Masses: Yet, Francis Wants to Kill Off the TLM – Why?

UK Govt Plans for Digital ID Means We Are Criminals Until We Prove Otherwise: Neil Oliver